We love sharing our process of making a print magazine and building a sustainable indie publishing brand. New here? Start with our list of popular posts.

As Douglas Rushkoff says, we need a new operating system for startups. The current one will keep producing the same extractive and monopolistic empires we’ve gotten so far. No, what we need is a new crop of companies that are institutionally comfortable with leaving money on the table. Leaving growth on the table. Leaving some conveniences and some progress on the board, in order to lead the world into a better direction.

Take your conscience to work 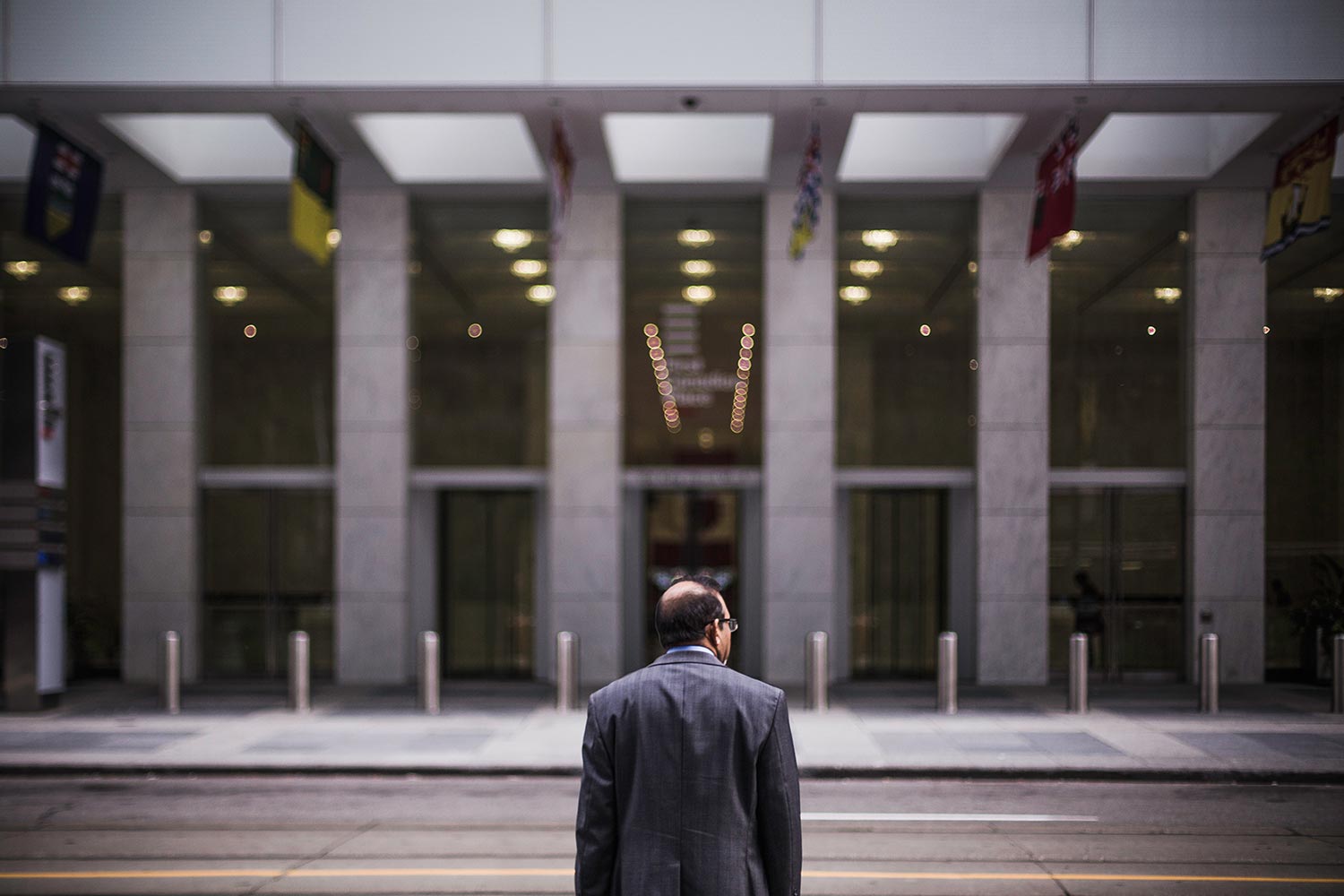 Last week I emailed my readers to give them a status update on the making of the next issue. As in all my pre-launch emails I included a list of what’s been happening here at Offscreen over the last few months. One of those things was the ad-hoc fundraiser for refugees that I ran back in September. Half an hour after pressing Send I received my first-ever hate mail: Gary didn’t like the fact that I was using Offscreen as a platform to support refugees.

While I think Gary and his attitude do not deserve more of my (or anyone’s) attention, it made me think about how ‘political’ a thing like Offscreen can or should become. (It’s depressing enough to think that humility and compassion is now a partisan issue.)

In my talks and here on the blog, I’ve long been promoting a more personal approach to our work. I believe that we can make better products and create stronger relationships with the people who buy/use these products if we build some of our ideology right into what we make. Thanks in part to the internet, we have the unique opportunity to put ‘corporate professionalism’ behind us and instead put our moral beliefs front and center.

I’m reminded of this excellent piece by Elizabeth Farrelly in which she describes how professionalism has become this destructive myth forcing us to leave our conscience at home.

Professionalism, which most of us were brought up to admire, implies compartmentalisation. It used to mean something good and noble; leaving petty emotions at home, taking your higher self to work, thinking beyond mere profit, doing good, committing to altruism. Now, it means almost the opposite.

Where ‘professional’ once meant 'bound to higher truths’, it now denotes payment. Professional dancers, politicians, footballers are those who do it for money. What this indicates is professionalism’s slide down the moral razor. Now what we leave at home is not petty emotion but conscience. (…)

Out there, in just-nuke-it profit land, those glimmerings of deeper knowledge – human wellbeing, nature’s dignity and how these twist together into spiritual value – are easily derided. Out there only the measurable matters.

For the next issue (spoiler alert!) I’ve been interviewing Yancey Strickler, the co-founder and CEO of Kickstarter. It’s a company I hugely admire not just for their immense success, but for how they managed to stay true to their early beliefs. Yancey talks about how idealism drives them:

We think that idealism is incredibly important. We tend to view idealism as being naïve, but maybe that’s exactly why it’s so important. What we sought to do with our mission and philosophy is lock in that idealism from the very beginning to ensure that it’s always a part of who we are. I think there is a certain magic in that.

Every big company once started as a small one, and while it’s not the case for all, many of them lost their soul or their meaning somewhere along the way. How often do we see people reminisce about their younger selves asking, “Remember when we cared about these things?”

Obviously, Kickstarter operate on a much different scale than Offscreen. But no matter how big or small, we all frequently face crossroads where we get to choose between following our conscience or succumbing to the lure of ‘professionalism’.

With Offscreen, I feel extremely lucky and privileged to be given a voice, to be able to provoke people’s thoughts on a particular subject in the hope that it instils just a little bit more empathy and humanity in them. And in the same vein, I hope that small acts of kindness towards people in need remind us of what it means to be human in a fairly dehumanising industry.

If you disagree and would rather not support me in doing so, email me and I will cancel and refund any order on your subscription that hasn’t shipped yet.

To Gary: I’m saddened that you have such strong feelings against people who are fleeing war. Let’s hope you never end up in a situation in which your life depends on the compassion of others. But just in case, I made another donation to the Australian Red Cross’ refugee efforts in your name.

Update: You guys never stop to amaze me. Since I made this public, many of you made further donations in the name of Gary. If only he knew...

Reading War and Peace on an iPhone

I used to own first a Kindle, then an iPad Mini. I sold both devices several years ago because I simply didn’t use them enough. Nowadays, whenever I feel like reading some long-form stuff on the go, I do it on my iPhone 6. The experience is certainly incomparable to reading longer pieces in paper form. I really struggle to focus. I find my hands cramping up and my neck going stiff. I once tried reading a book on my iPhone (The Omnivore’s Dilemma, through the Kindle app) and I only got to around page 50 before abandoning the idea.

Clive Thompson must have seen it as a challenge. He committed to reading – purely on his mobile phone – one of the longest and hardest books out there: Tolstoy’s War and Peace, which in its paperback form has no less than 1296 pages. He summarised his experience in this lengthy and insightful article that contains some really interesting observations around physical vs. digital books.

I certainly wrestled with social distractions. Your phone is, as I’ve often joked, not really so much a “phone” as a “portal through which five or six gigantic multinational firms fight for your attention so they can sell you advertising.” For services like Facebook and Twitter, distraction is central to the business model.

To focus on Tolstoy, I had to be much more “mindful.” I had to start paying attention to my attention, to notice my own urges to peek at Twitter or email, so that I could decide to actively ignore them, instead of responding with a Pavolovian lunge for the app.

On the design/usability of real books

Bookmakers have spent hundreds of years patiently tweaking their design for maximum usability and loveliness. In the early years following the Gutenberg explosion, books were, by modern standards, surprisingly weird and unusable. They often had no paragraph breaks, no page numbers, no indexes — none of the features we typically use to navigate and orient ourselves in a book. It took a long time to arrive at their elegant modern design.(...)

Today’s digital books do not give you the nearly-sensual, visual sense of “where” something is in a book. We remember bits of a book not just by the words, but how they looked on the page — where they were located, how our hands lay next to them.

On the seriousness of real books

Some new research into the nature of reading suggests an intriguing reason we remember more from print books than digital ones: It’s because we expect print to be intellectually engaging. We approach it with an orientation that “this is serious business,” in a way that we don’t when we read on a screen.

To be fair, he’s also highlighting some interesting benefits of reading the book in digital, so his review is not just an anthem for the good old paper format. To find out what he prefers, you should read the article.

The bullshit filter of history

When contemplating the future, we place far too much emphasis on flavour-of-the-month inventions and the latest killer apps, while underestimating the role of traditional technology. In the 1960s, space travel was all the rage, so we imagine ourselves on school trips to Mars. In the 1970s, plastic was in, so we mulled over how we would furnish our see-through houses. [The author] Nassim Taleb (…) coined a word for this: neomania, the mania for all things shiny and new.

In the past, I sympathised with a so-called ‘early adopters’, the breed of people who cannot survive without the latest iPhone. I thought they were ahead of their time. Now I regard them as irrational and suffering from a kind of sickness: neomania. To them, it is of minor importance if an invention provides tangible benefits; novelty matters more.

So, don’t go out on a limb when forecasting the future. Stanley Kubrick’s cult movie, 2001: A Space Odyssey, illustrates why you shouldn’t. Made in 1968, the movie predicted that, at the turn of the millennium, the US would have 1000 strong colony on the moon and that PanAm would operate the commuter flights there and back. With this fanciful forecast in mind, I suggest this rule of thumb: whatever has survived for X years will last another X years. Taleb wagers that the 'bullshit filter of history’ will sort the gimmicks from the game changers. And that’s one bet I’m willing to back.

Lots to think about in this short excerpt from The Art of Thinking Clearly.

Everyone needs a Glory Wall

The talented Jonnie Hallman is writing honestly about the emotional rollercoaster that comes with building a bootstrapped business on top of his app Cushion:

Bootstrapping shares a similar emotional rollercoaster to freelancing. On an up day, I might have a few dozen signups and, all-of-a-sudden, I feel unstoppable. I start thinking about hiring people and taking on less client work. I look months into the future and make projections on where Cushion will be based on that one good day.
Then, I won’t see a single new signup for an entire week and that impenetrable confidence begins to waver. I start doubting that I’ll ever be able to hire the help I so desperately need. I look to take on new clients because I’m now projecting the future based on this week alone, thinking I’ll be homeless in no time. I feel like no one cares anymore because nobody mentioned Cushion that week.

I can totally sympathise with him (as most entrepreneurs and sole business owners can). At Offscreen, there are days when I get ten orders for back issues and a couple of starter packs within hours, and then there are days when no one orders anything. It’s difficult to remind yourself that people still appreciate your product even when there is no chatter about it online or you make no sales.

In our issue 11 Pip Jamieson, founder of The Dots UK, shares a beautiful nugget of wisdom that I’ve added to my list of things to do when the issue is finally done. She writes:

In the past I’ve been completely guilty of jumping from project to project without reflecting on the amazing things we’ve achieved. That’s when we started our Glory Wall (sorry for the name, it just stuck) where every month the team pins up something they’ve achieved on a wall in our office. It can be anything from a lovely message from a community member to a press clipping or a quote. It’s a wonderful, visual motivation tool and a daily reminder of how far we’ve come.

Go forth and build your own Glory Wall. I know I will.

News →
The latest updates from Offscreen

Production →
Behind the scenes of design, production, shipping, and distribution

Snippets →
Related reading from around the web

Letters →
Letters to the editor and other mail from our readers

Popular →
Recommended and most popular posts on this blog

Have comments or feedback? Join the conversation on Twitter or email us.